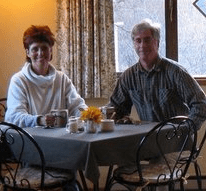 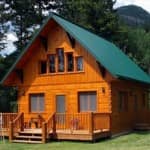 We’ve done two projects with Aaron and Bondu Log Homes, 2 cabins in 1996 and 2 cabins in 2000 for our small resort in Windermere, BC. We’re extremely satisfied with the quality of the product, the craftsmanship and the construction experience.

This year, 2014, the cabins are in their 18th and 15th seasons, respectively and still look brand new. Guests are constantly amazed when they ask when the cabins were built. We average 200 nights per year occupancy in each of them. They are very well built and have held up to the rigors of commercial usage. 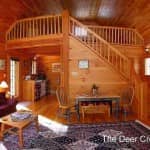 Google Streetview did virtual tours of the cabins the summer of 2013 which show them as they are today.

The log wall construction method attracted us initially because of the energy efficiency and we have not been disappointed. They are heated all winter with baseboard electric heat and have 60 gallon hot water tanks to supply the double Jacuzzi tubs. Last year, the average energy consumption was 8819 kWh per cabin, or $878 at BC Hydro commercial rates.

The cabins don’t have air conditioning, as with 13 opening windows in each, the air conditioning systems would be left running with the windows open, but this has not been a problem. The area usually cools down to 10-13°C  every summer night, so if we open the windows at night and start the day below 20°C  inside, then shut the windows, the cabins rarely will go above 22°C .

We would highly recommend Trappeur Homes and would use them again if we were to expand.