Finding mold within a wall or roof assembly when renovating a newer building is common today.
First we thought this happens only in older buildings if the vapor barrier was not installed correctly.

The question is, why do we often find mold in newer buildings?

We did some research and started to look at older
conventional building techniques which had no mold problems and did not use any vapor barrier. 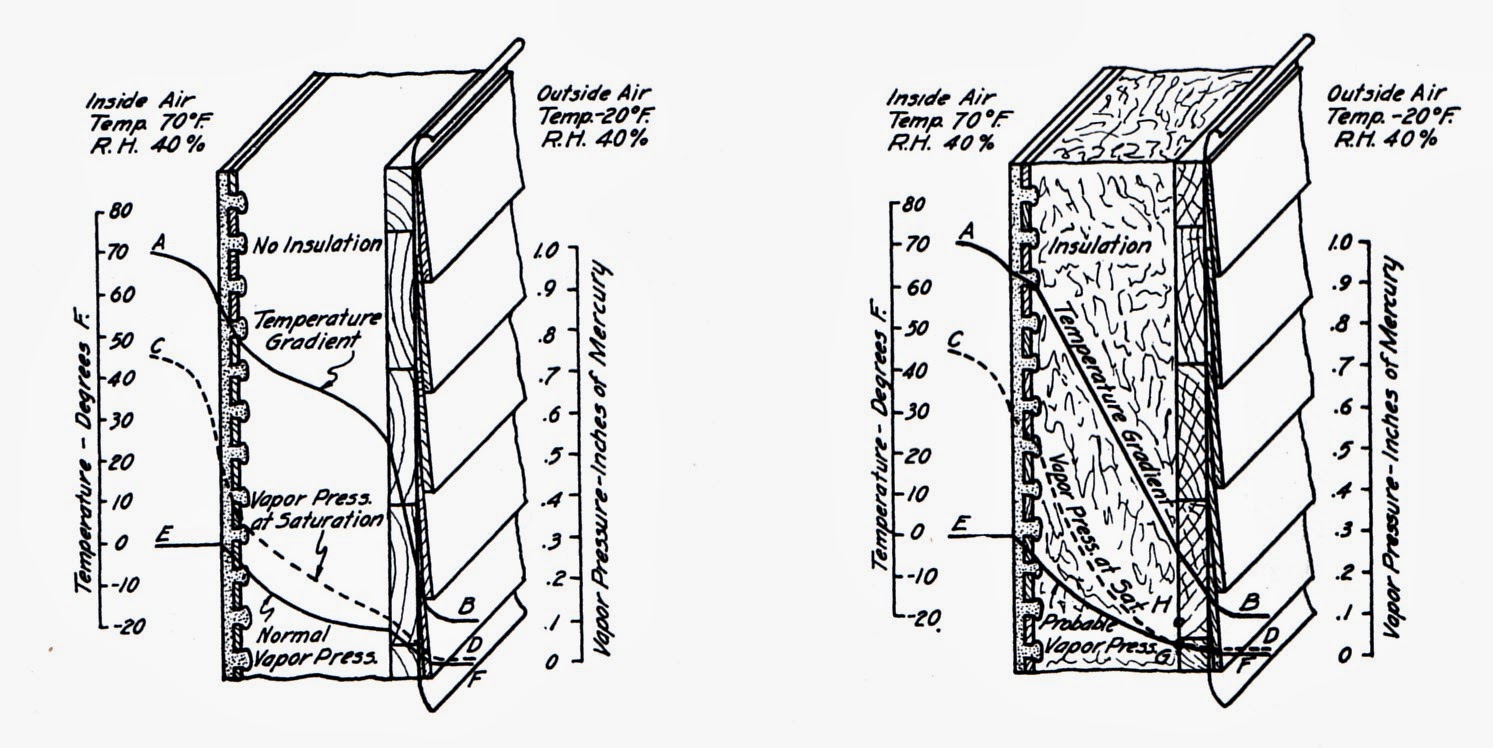 In order to get a better understanding of what is going on within a wall, we analyzed different types of wall systems using the “Glaser Diagram” or “Profile Method”.

In short, the “Glaser Diagram” or “Profile Method” is a diagram which displays a temperature gradient and a vapor pressure gradient through a wall section.

Frank Rowley produced a seminal paper in 1938, which drew both a temperature gradient and a vapor pressure gradient through a wall section. Helmut Glaser did a similar test and created the Glaser diagram in the mid 1950’s.

Like many aspects of building physics, vapor diffusion first became the subject of academic study because there was a problem that needed both an explanation and a solution.

Here is what we read in a blog (The Little Known History of the Vapour Barrier) from Mark Brinkley.

The story is told in fascinating detail in William Rose’s book Moisture in Buildings. The problem was first noticed in the 1930s by American house painters engaged on painting the external timber claddings, or sidings as they call them, which were and still are so prevalent there. They reckoned that they were getting more problems and more call backs on jobs where the walls had been insulated. Ergo, there was something about adding insulation to the walls that was causing the paint on the wall sidings to peel, crack or whatever.

In a nutshell, the blog states, adding insulation increased the moisture content and drying time of the wall and created the exterior paint problems.

Frank Rowley’s solution to eliminate moisture within the building assembly was to apply a vapor barrier installed inside the wall which was adopted in the building code worldwide.

Based on Rowley’s and Glaser’s research and using the vapor barrier, there should be no moisture and no mold build up within the wall or roof assembly, but there is.

So what is going on?
Based on the “Door Blower Test” it shows that no building is really 100% air tight, meaning moisture is able to get into the wall system.

Further, Rowley took great pains to eliminate the effects of both radiant and convective heat transfer, because the theory rested on comparing the rates of heat conduction with vapor pressure.
The fact that his initial experiments were carried out in conditions very different to the typical house wall was ignored. In testing for vapor diffusion, he deliberately eliminated the effects of heat transfer by convection, radiation and air movements.
He was also only measuring the airborne water vapor in the air: the far bigger reservoir of bound water in the materials was overlooked, possibly because it wasn’t generally understood at the time. 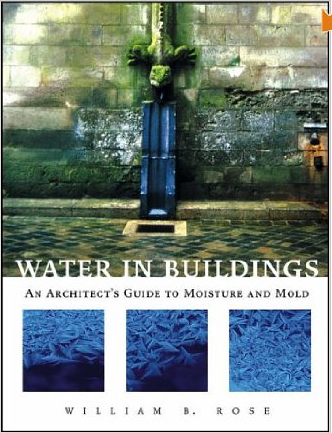 William B. Rose, author of the book “Water in Buildings” and Senior Research Architect in the Indoor Climate Research & Training (ICRT) program made the following statement:

The principal criticism on Rowley’s research (around 1938) is this:

The “Profile Method” cannot detect types of moisture problems other than those related to diffusion.

We have been seriously side tracked by the emphasis the profile method has received in the last 50 years.” 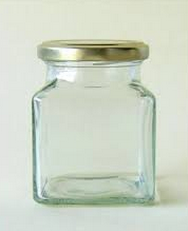 Bill Rose shows with a very simple sealed jam jar experiment that there are way more complex variables occurring within a wall assembly.

The question is, what happens if you have a cube of wood in the sealed jam jar? How does this affect the humidity level and humidity content?

The experiment shows that heat will force out the humidity from the wood and the humidity level and content within the sealed jam jar increases. 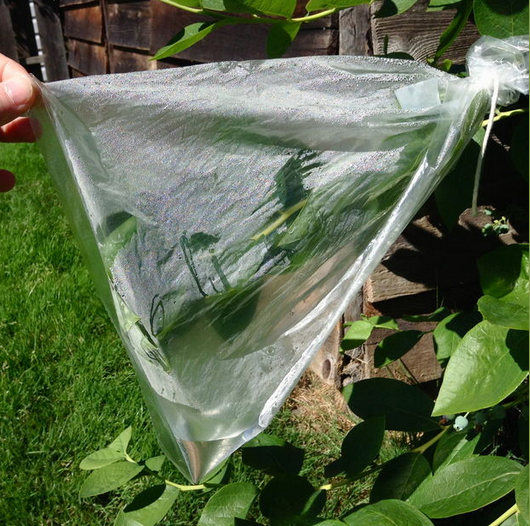 As a practical example, in today’s outdoor survival training one uses this simple method in order to create drinking water. By collecting leaves and branches and sealing them in a plastic bag and exposing it to the sun, the heat will force the moisture out of the leaves and wood and the result is drinking water.

Based on this experiment and knowing that most of our lumber (even kiln dried) still stores a large amount of water within it, and if the industry continues to seal the outside of the wall, the humidity within the wall and roof assembly has no chance to dry out. With this condensation, mold will start to grow.

Our conclusion Today’s wall and roof assemblies are built way to airtight.

The “Glaser Diagram” shows very clearly that in today’s wall assemblies, the drying rate of an average wall is over 100 days versus about 40 days in older wall assemblies.

The lesson we (www.TrappeurHomes.com) learned, based on our research, is:

Work with what you have
Moisture will always be in a wall
Don’t try to build a vapor sealed building envelope
to keep moisture out…..this will also keep moisture within.

In the last couple of months we have been working closely with our friend Tomaz Stich, stich consulting & design (Passive Home designer). He has helped us in working with the Glaser diagrams and has made us aware of a lot of options and materials. With Tomaz, we have learned about the following products:

The INTELLO membrane, manufactured by Pro Clima of Schwetzingen Germany, is the state-of-the-art for interior vapor control and air-tightness for cold and mixed climates.  It is an intelligent membrane that changes permeability in a range from 0.17 perms in winter to over 13 perms in summer depending on the relative humidity around it. This intelligent range of permeability can give assemblies maximum protection against moisture damage.

Premium Wood Fibre Board – The Smart Choice for Insulation Board

Best would be to replace OSB or plywood with the Wood Fibre Board. The Wood Fiblre Board is not a structural sheeting and you would need to use wire strapping to get the lateral stability of the wall.

Here are the benefits of the Wood Fibre Board:

We also have a blog with more information about the Wood Fibre Board at www.TrappeurHomes.com

If you have any feedback or interest in purchasing the Intello Membrane or the Wood Fibre Board (T&G) please contact us at build@TrappeurHomes.com or at the Invermere Home Hardware Store.